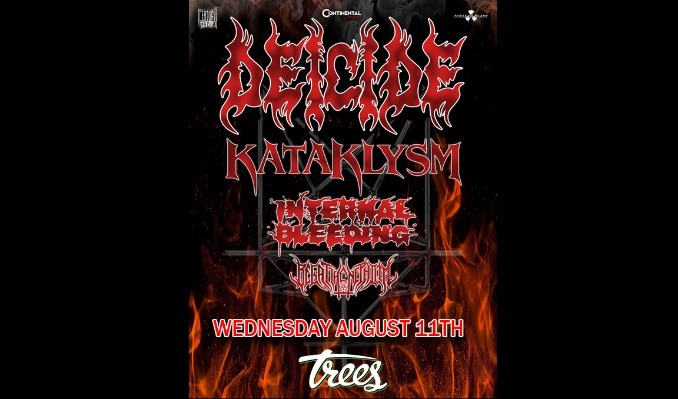 Twenty years ago, an underground cult movement surfaced in Tampa, Florida that revolutionized the metal world. The pioneers of this burgeoning scene, DEICIDE, are still striking fear into hearts of the masses to this day. Century Media Records are extremely proud to announce a worldwide deal with DEICIDE, one of the founding fathers of death metal and easily one of the most influential and controversial bands ever. With a relentlessly brutal sound and uncompromisingly blasphemous lyrics, DEICIDE helped set the standards for extreme metal and have maintained those standards ever since.

DEICIDE led by original members Glen Benton (vocals, bass) and Steve Asheim (drums) have been busy at Audiohammer Studios with Mark Lewis (Black Dahlia, Chimaira) and are looking at a summer '09 release. The group have reunited with legendary guitarists Jack Owen (ex-Cannibal Corpse) and Ralph Santolla (Obituary, ex-Iced Earth, Death) and will embark on a two-week European tour in January 2009.

Benton states: “I want to say it is an honor to be an official CM artist. I look forward to working with the fine folks at CM and providing them with our style of metal. I can ensure you that what surfaces will definitely be nothing less than a total bash-your-face-in-from-start-to-finish, bastard. "

Asheim further comments: “I'm happy to be a part of the CM family and look forward to working with them. The new DEICIDE material in the works should be a good way to kick off the new deal. It’s a totally sick new record with a totally sick new label, but the same ol’ sick DEICIDE. See you all in 2009 and hold onto your balls!”

DEICIDE released their groundbreaking self-titled debut in 1990. Recorded at Tampa's Morrisound Studio (the legendary studio where the band would go on to record all its albums), the vicious debut would soon be hailed as one of the "Top 100 Metal Albums of the 90's" by England's metal authority, Terrorizer Magazine. In 1992, DEICIDE followed up their debut with “Legion”, which was an instant success, further establishing their furious musical intensity and vengeful anti-Christian stance. This landmark extreme metal release secured their place at the forefront of the American death metal scene as they rapidly earned a reputation for controversy.

DEICIDE’s appearance and live antics matched the extremity of their music and lyrics. With an inverted cross branded into his forehead, Benton cast himself as the incarnation of pure evil. At shows, he was known to pull such stunts as dousing the crowds with bags full of real animal organs. DEICIDE quickly found themselves banned from clubs, boycotted by magazines, and blacklisted by Christian groups and animal-rights activists. Anti-establishment to the core, DEICIDE embodied the worst fears of the conservative masses, and loved it. Rather than shy away from controversy, DEICIDE provoked it and willingly engaged in it.

DEICIDE stormed ahead into the future, releasing numerous albums engulfed by waves of controversy, as their popularity continued to ferment within the scene. However, it was the 2006 release “The Stench of Redemption” that put the band back on the map as the leaders of the genre. This was their first album to showcase the more melodic leads of guitarists Owen and Santolla which only added to their riotous and enigmatic success. DEICIDE looks forward to taking things to the next level in 2009, promising to deliver the album of their already heralded career.
Read More

AmazonMySpaceFacebookOfficial Website
*Service and handling fees are added to the price of each ticket.
Buy Tickets