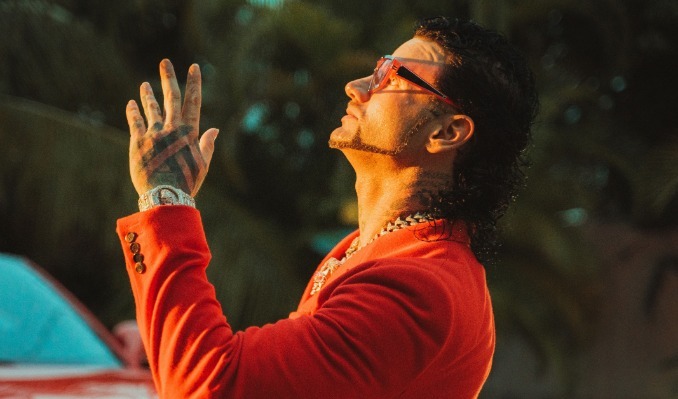 He has photo shoots with Terry Richardson.  He is close friends with Justin Bieber (who gifted Riff with a chain) and Drake.  SPIN magazine has labeled his debut album NEON iCON as the most anticipated album of the year.

His videos have garnered more than 50 million views on YouTube. He boasts more than 900,000 Twitter followers and tours the country without ever releasing a studio album. He has sold out shows from London to France, Finland & Germany all the way to the 4,000 person Sydney Opera House.  His distinctive style and persona have even inspired a character in a blockbuster motion picture. There’s only one man whose resume is so robust: RiFF RAFF.

The rapper’s seemingly incessant musical and visual output and wild material have made him one of music’s most in-demand collaborators. It has also landed him a recording contract with Diplo’s Mad Decent label, which is slated to release RiFF RAFF’s NEON iCON album.

RiFF RAFF combined his wide range of tastes and his expansive talents into what would become one of rap’s most notable careers. He started rapping in the mid-2000s and, before many other artists of his generation, understood the significance and power of the internet. RiFF RAFF dropped dozens of viral videos and became an independent sensation thanks to eye-popping clips for “Jose Canseco” and “Marc Jacobs.”

RiFF RAFF’s videos, in particular, have helped build his brand, as he went on a creative tear and released 107 videos in a year and a half.  One of those breakthrough videos was “Bird on a Wire,” a collaboration with Action Bronson and producer Harry Fraud. The clip, which was released in 2012, has garnered more than 2.5 million views on YouTube. His “Larry Bird” video, a song and clip that highlights his otherworldly wordplay, his tattoos, his grill and his signature braids, has more than 1.7 million YouTube views.

Official WebsiteMySpaceTwitterFacebook
*Service and handling fees are added to the price of each ticket.
Buy Tickets