Beast in Black, Edge of Paradise 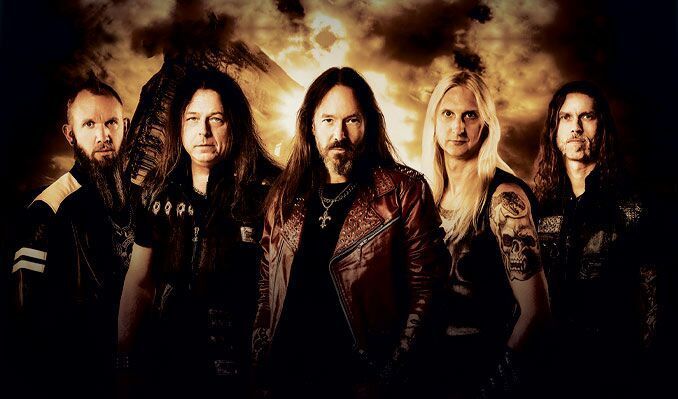 Formed in Goteborg, Sweden, in 1993 by guitarist Oscar Dronjak. Early line-ups included members from In Flames and Dark Tranquillity, most notably Jesper Stromblad, who continued to write songs together with Oscar and singer Joacim Cans despite leaving before the first album was released. "Glory To The Brave" (1997) and "Legacy Of Kings" (1998) cemented the band as the pioneers of modern Eighties heavy metal.

Often credited with bringing back the melodies and honesty in music, the world-wide crusade continued with "Renegade" (2000), an album that generated a breakthrough for HammerFall and metal music in general in the mainstream media in Sweden.

The line-up was now complete with drummer Anders Johansson, formerly of Rising Force fame, Stefan Elmgren on guitar and Magnus Rosen on bass guitar. The latter two joined HF before the release of the inaugural record, with Stefan even being a session player on "Glory To The Brave".

"Crimson Thunder" (2002) was next, followed by a live album and DVD - "One Crimson Night" (2003) - recorded in their home town in front of a capacity crowd. The fifth album, aptly titled "Chapter V: Unbent, Unbowed, Unbroken" (2005) further planted the name HammerFall in the minds of households in Sweden, as well as metal fans all over the world. The band's fourth world tour on as many albums was an even bigger success than before, headlining the U.S. for the first time (after supporting Death and Dio in 1998 and 2002 respectively).

Two sportsrelated videos were recorded in 2006, a remake of "Hearts On Fire" for the Swedish Olympic Women's Curling Team and a brand new song specifically written for Kajsa Bergqvist and a couple of other Swedish track & field superstars, culminating in a performance at the opening ceremony at the European Athletics Championships in August, bringing HammerFall into the home of 250 million people around the world. Threshold (2006) saw the light of day at the end of the year, and virtually the entire 2007 was spent on the road promoting it.

Magnus Rosen left the band in March. Without skipping a beat, original basist Fredrik Larsson was brought back into the fold, elevating the musical side with his steady brilliance. Celebrating its ten year anniversary as a record-releasing artist, HammerFall released "Steel Meets Steel - Ten Years of Glory" (2007). The album features two brand new tracks, a re-recording of an old classic plus some bonus material for the true fans.

Surprising to all, Stefan got a job as an airline pilot in the spring of 2008, and after careful consideration decided to pursue that dream instead. Pontus Norgren of The Poodles fame replaced Stefan and made his on stage debut with the band at the Heavy MTL Festival in Montreal, Canada.

Sometimes hailed as the leaders of the new heavy metal movement, "the new and improved" HF is currently working on a new studio album, scheduled for release on February 20th, 2009.

Official WebsiteMySpaceTwitterMore InfoFacebookAmazon
*Service and handling fees are added to the price of each ticket.
Buy Tickets