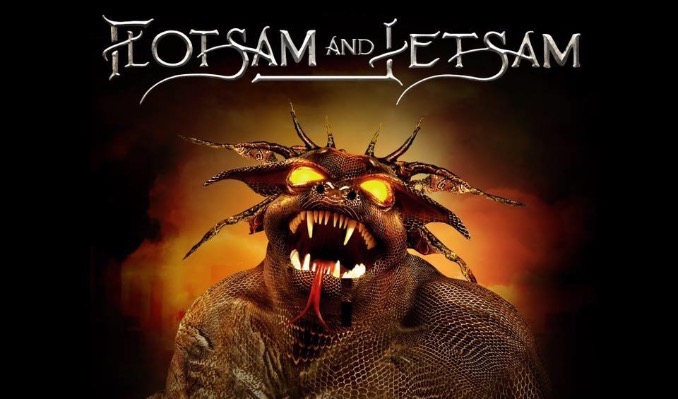 FLOTSAM AND JETSAM is a band from Phoenix, Arizona with a legacy that goes back well over 30 years. Originally signed to Metal Blade records in the mid 80’s,
FLOTSAM AND JETSAM released their highly acclaimed debut “Doomsday for The Deceiver” in July of 1986. At this time the band consisted of Eric AK Knutson (Vox), guitarists Michael Gilbert and Edward Carlson, and founding members Kelly David Smith (Dr) and bassist Jason Newsted. Soon after the release of DFTD, Newsted left the group to join Metallica shortly after the passing of their bassist Cliff Burton. Shortly after, Flotsam hired bassist Michael Spencer (Sentinel Beast) and continued to tour and write for their next album, “No Place For Disgrace.”

In May of 1988 NPFD was released on Elektra records, but not without member changes once again in the bass department. Troy Gregory soon took over for Spencer who departed after a fall 1987 tour. Spencer would return years later. Even with the line-up changes, NPFD proved to be a thrash masterpiece that was embraced by fans around the globe. The band would even re-record this album a few decades later.

Flotsam’s next record “When the Storm Comes Down” followed in 1989 on MCA, and it’s exhausting tour schedule caused Gregory to depart by the end of the album cycle. In 1992, the band released another landmark record in “Cuatro”, along with new bassist Jason Ward. This lineup finally solidified the band for a good 5 years and also became known to fans as the “Cuatro lineup”. Over the course of the next few years the band would release the albums “Drift” and “High” before drummer Smith and guitarist Gilbert decided to depart for personal reasons. Over the course of the next decade FLOTSAM AND JETSAM stayed the course with Eric AK and Ed Carlson being the only members from the “80’s era”, and released four more studio albums with drummer Craig Neilsen and Guitarist Mark Simpson and Ward through the late 2000’s.

In 2011, Glibert and Smith returned to the band along with the rumor that Newsted might rejoin as well. Due to personal commitments, Newsted stayed out, Ward stayed in, and the “Cuatro lineup” released “Ugly Noise” in December of 2012.  Shortly after touring for the record, Carlson left due to shoulder pain and was replaced by Steve Conley from the band F5. Ward left shortly into the tour cycle only to be replaced by the returning Michael Spencer. Throughout 2013 and 2014 the band did more touring to once again re-establish their career, and re-recorded and released the classic “No Place for Disgrace” album. Shortly after touring for NPFD 2014 original drummer Kelly Smith left once again and was replaced by longtime friend Jason Bittner (Shadows Fall) in the winter of 2014.

In theory, the band FLOTSAM AND JETSAM started in January 2015 when Eric AK, Mike Gilbert, Michael Spencer, Steve Conley and Jason Bittner got in a room together to start rehearsing for upcoming 2015 European tour dates, and to commence writing for the band’s next record. Initially the band concentrated on the back catalog and most recent setlists to make sure the touring obligations would be fulfilled, and the band was comfortable playing together. Soon after, the band focused on it’s writing and started pre-production for the new songs that were taking shape. After a 5 month initial writing process, the band completed 18 rough ideas to start having Bittner track drums to. At first the band thought about a double release, but realized it would be better to concentrate on an album’s worth of killer material by what essentially is a new band with a 30-year history.

After picking the final songs, the band compiled some demos to start gathering label and producer interest. Shortly following summer festivals, a short US tour, and another fall European headline tour, the band finally secured Chris Collier (Prong/KXM) to produce the band’s “return to form”, as well as AFM records to provide the much needed label support that the metal veterans required.
The end result is the self- titled effort FLOTSAM AND JETSAM which is the culmination of a year of hard work which shows five very distinct personalities and influences come together for the common goal of creating another soon to be metal classic, as well as another pillar in the foundation of a band that has managed to stay alive and current amongst an ever-changing music scene.
Read More

Official WebsiteFacebook
*Service and handling fees are added to the price of each ticket.
Get Tickets